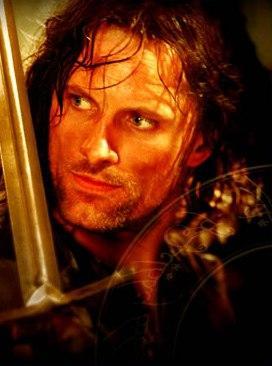 He acts! He paints! He writes poetry! And he turns women to jelly. Viggo Mortensen talks to Josie McNaught about his exhbition of photographs taken in New Zealand during filming of Lord of the Rings.

Two hours have passed since Viggo Mortensen was supposed to ring me. It's Sunday and my carefully laid plans to ensure offspring and spouse are not within disrupting distance of my phone and tape recorder have gone to mush. Maybe he's never going to call. Which would be a shame. Casually dropping his name into conversations with the girls over the past 48 hours has produced more gasps, heaving bosoms and sighs of jealousy than a Lotto win.

For the uninitiated, Mortensen is Aragorn, Lord of the Rings' own hunk of spunk. He leads his troops into battle, gets to kiss the girl (Liv Tyler) and generally perform other heroic duties throughout the film trilogy. He's 45 but looks younger.


In Wellington, his activities between working on Peter Jackson's movies have become the stuff of urban legend. Like the number of women he is supposed to have dated; the time he was spotted wandering down Cuba Mall in the middle of winter barefoot (with the long matted hair and beard, he does bear a passing resemblance to the city's own homeless character "Blanket Man" who resides on the pavement there); and in the true spirit of method acting, he is rumoured to have walked around a city supermarket with his sword.

Two days later I'm in a toy shop looking at the small Aragorn figurine that my son has thrust into my hands bleating "I want, I want", and I'm wondering if this is as close as I'll get to Viggo. But that evening the phone goes and his soft, tired drawl comes down the line from Mexico City, where he's collecting material for one of his forthcoming Wellington photographic exhibitions.

It seems roaring at oncoming orcs over the ramparts has done his other careers no harm. Before reaching super-stardom on the Rings films (his movie career seems to have come along somewhat since he played "Worthless Junkie" in the worryingly named 1995 movie Black Velvet Pantsuit), Mortensen built up a solid following as a photographer, painter and poet. It's a creative side that he's been able to continue during his time in New Zealand. He has enough material from his time in New Zealand (off and on he was here for about four years - the longest stretch being a year and a half) to stage two exhibitons in Wellington and headline a poetry-reading benefit.

From November 29 to the end of January, Massey University will host a large survey of Mortensen's recent photographic work, while at City Gallery's Michael Hirschfield Gallery his photographs of the Wellington region, Mo Te Upoko-o-Te-Ika/For Wellington, will also be on display.

The poetry reading has already been moved from the City Gallery to the larger Paramount Theatre, such is the demand (as one female friend succinctly put it: "stuff the poetry, I'm going to see him"). All proceeds go to the International Institute of Modern Letters at Victoria University. The event will be given some literary muscle by the presence of Bill Manhire, who will introduce Mortensen, and master graduates Tusiata Avia, Hinemoana Baker, and Cliff Fell, who will also read their work.

The bucks don't stop there though. The night before, Mortensen will appear at a $100-a-head invitation-only launch of his Massey exhibition, with all proceeds going towards the university's proposed School of Film. And then it will be time for the star-studded Lord of the Rings: Return of the King world premiere on December 1 at Wellington's Embassy Theatre. Mortensen will be joined by Liv Tyler, Elijah Wood, Orlando Bloom, John Rhys-Davies, Sean Astin, Dominic Monaghan, Billy Boyd, Hugo Weaving and Sir Ian McKellen, as well as director Peter Jackson, score composer Howard Shore, special effects guru Richard Taylor and producer Barrie Osborne.

A cynic might dismiss the poetry and photography as a "portrait of the film star as an artiste" bid, but Mortensen is no lightweight in the other creative worlds he inhabits. His work has been exhibited in galleries in the US, Cuba and Denmark, and he has published several books, some through his own company, Perceval Press.

There's also no arguing Mortensen has been generous with his fame - and his limited time. He's curating and hanging the show at Massey himself, and apart from his public appearances he'll have some serious media calls to deal with for the premiere of the third and final Rings instalment. He says simply that he wants to give something back to a city (and country) he has become very fond of.

"I am a believer in the idea that it's not where you are, it's how you are, but that being said I was immediately moved by the light and the colours and the smells in New Zealand. It's a very sensory place. I don't know that anyone could spend a significant amount of time there and not become attached."

He's even fallen for the wind, and describes living in Wellington as like being high up on a mountain, with the pace that the clouds move at and the strength of the sun at certain times.

It's the sun perhaps that's affected his work more than anything else. "I found myself, even though in New Zealand there's that hole and you have to be careful of the sun, nevertheless I found myself looking at the sun more often, it's so strong and mesmerising."

Mortensen says the filming work was tiring and he found himself looking at the sun both to calm himself down and give him energy. "I found myself shooting more and more into the sun, using more and more flares and reflections."

Rebecca Wilson is curating his show at the Hirschfield Gallery. She says Mortensen's lyrical photographs are carefully observed meditations on life around him, and include portraits, landscapes and abstractions.

"His sensibility as a painter is a strong thread in his photography, where colour, light and movement express the artist's often intuitive response to his environment."

Mortensen also lugged his paint and canvases around the countryside while he was here. "I dragged work around with me in my rental car, and I drove all over New Zealand repeatedly. I tried not to fly so I could see as much of the country as I could."

And the country has inevitably made its way into his paintings. Mortensen found himself using certain blues and greens "in response to the landscape". But time constraints meant the camera came out more often, and it put a brake on how much time he had to check out New Zealand art. But, fatefully perhaps, the first art show he saw here was a Colin McCahon exhibition at City Gallery in late 1999.

"I wandered into the gallery and saw these paintings, and I didn't know anything about McCahon, but I was struck by his work, and I really responded to it, I could relate to it."

The effect of this epiphany can be heard in his voice. It's an experience that's stayed with him, although we're yet to see much black on his canvases. Instead they are often riotously colourful, in contrast to his more sombre, moody photographs and poems.

Bill Manhire thinks Mortensen's poetry is great - so much so that he wrote to Mortensen suggesting a poetry reading for his students at Victoria University's creative writing school. "The benefit thing came out of that, and Viggo particularly asked to read alongside some new Wellington poets," says Manhire.

The poetry works because Mortensen is Scandinavian (Danish father, American mother), says Manhire, "and there is this Scandinavian myth about how poetry is a mixture of blood and honey - his poetry has that mixture."

Poems such as Castro's (named after a famous, though sadly now closed, late night bar/restaurant in Wellington) are begging to be labelled bittersweet. I suggest that its theme of love and loss is bound to go down well with female audience members at the reading, but Mortensen is good at pretending he's not a sex symbol and feigns surprise.

His exhaustion is almost palpable now, and I do the decent thing and start to wind things up. Suddenly he's wide awake and worried that he's rambled on too much and hasn't talked specifics. Seems like a good time to clear up some of those urban legends then: He fesses up to the bare feet ("Did someone see me?" - yes Viggo, it appeared on the front pages); and gives a pretty firm denial to the sword-carrying incident ("Or if it happened, I don't remember it.")

As for his love life, he comes over all American, neither confirming nor denying he has one, which leaves enough doubt about his availability to keep his fans guessing (for the record, he's divorced and has a son, Henry).

Although this interview was arranged to discuss his art, not the film that's brought him such fame, inevitably Mortensen brings it up, to talk about Jackson as an artist: "If you look at the way that Peter Jackson did the movie, he had a plan obviously about how he wanted it to be, but he wasn't afraid to try things out and be bold. Like life."

For Mortensen, you could also say life is art, and vice versa. He doesn't consciously separate his different creative roles. To him it's different ways of doing the same thing. "Asking questions, finding out things for yourself and in the end communicating with others."

When I reveal that my sword-carrying three-year-old is totally transfixed by the battle scenes from the second Lord of the Rings film, Mortensen seems pleased.

"If he liked that, he'll love the next film. It's almost all battles and lots of horses," he says.