Alatriste Fights In The Streets

By Rocío García - translated by Paddy and Elessars Queen 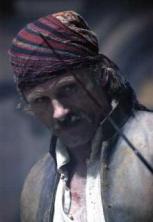 Alatriste is at the front of the dreaded Spanish troops, prepared for the final grand battle against the French. Three flags from the Cartagena regiment wave in the background. Feathers and red bows, distinct to the Order of Saint Andrew, stand out against the dusty clothing, bloodied and sweaty from more than 500 soldiers. Forty-six cadavers (in reality clothed bundles of straw) have remained scattered in the field. Everyone looks ahead defiantly. The explosions rumble in the background and many of the lances fall to the ground broken. The first artillery fire falls against its target and many soldiers agonize on the ground. In the middle of the battle, the maestro appears in a field chair, dripping with perspiration. The regiment doesn't give in to defeat, they are always behind their Captain Alatriste. Half of the troops drop a knee to the ground, while a deafening call sounds out 'lances' - resounding between the soldiers. 'Cut,' a soft voice calls out from the background. It is the voice of Agustín Díaz Yanes, all exquisiteness and placidity around him. And the troops returns to their original place. As does Alatriste, even though the defiance does not disappear from his face.

It is the last scene of Alatriste. The beautiful plains of Uclés (Cuenca) with the 16th Century monastery in the background, has converted itself for a couple of days in July into the battlefield of Rocroi, where the Spanish regiments were defeated by the French troops in May of 1643. The film is the largest Spanish production to date. Twenty-four million Euros in principal Spanish investments, directed by Agustín Díaz Yanes and starring the New York actor Viggo Mortensen, star of great films such as the Lord of the Rings trilogy, Psycho, G.I. Jane and Carlito's Way.

Alatriste has jumped from the page to the streets. And it has done so on a grand scale. The hero of the convulsed Spanish 17th Century, created by Arturo Pérez-Reverte, has fought in real streets, ports and beaches for the duration of the fifteen weeks of filming. He has lived the pompousness of the Golden Age, through great battles, with thousands of extras, swordfights, ship boardings in the middle of the sea, cannons, horses, galleons...But there has also been a space for the intimacy of this valiant swordsman, capable of, in a candlit environment and distanced from the grand open and blue outdoors, filmed in an old farm in Talamanca del Jarama (Guadalajara), the ability to be on the losing end of a trade of a valuable gold chain, a gift from King Phillip IV, for a strand of pearls for his beloved and beautiful Maria de Castro. 'You're losing in this exchange,' the owner of the jewelry shop tells him. 'That's my business,' a gentle and hoarse Alatriste answers. 'It is a film more about feelings than actions,' Agustín Díaz Yanes assures us.

It has taken 10 years to bring this film to life. To begin with there is one name: that of the producer, Antonio Cardenal, who movingly lives that dream that has cost him so much. 'I have had many ups and downs, moments of euphoria, as well as difficult ones, but I have always maintained my faith in the great character of Alatriste.' The incorporation of Agustín Díaz Yanes, in addition author of the screenplay created from Arturo Pérez-Reverte's five novels, gave the definitive enthusiasm to the project, which became gigantic when Viggo Mortensen, a movie star who speaks Castilian, gave a quick 'yes'. It was then that Tele 5 - Picasso Studios, Alatriste's other producer, together with Origen (Antonio Cardenal) and Universal Studios decided to take the film to a greater dimension than originally envisioned. That is how Álvaro Augustin, director of the film division of Tele 5, tells it: 'When a film has a large budget, the investment is difficult to recover, but thanks to a figure like Viggo Mortensen, everything grows (financially),' he assures us. Augustin has great hopes for what this project can demonstrate in the Spanish cinema, in regards to large scale productions in our country. 'The execution (level) of this film is the same as large American adventure films, but with three times less cost. If it turns out well, the industry will be encouraged and we will go on demonstrating what we are capable of.'

Viggo Mortensen, a perfect wicked blue-eyed Alatriste, is, in Pérez-Reverte's words, "the exact image of the weary hero". "We have become close friends and that has been very good for cinema and for life. He is incredible. He is a very confident performer, he can express everything with his eyes, he is an action actor and an interior one, who appears in all the scenes of the film, around 90, but six. It was like filming with a Spanish actor, you can ask him all the cinematographic favours you want. He is also very self-demanding from an artistic and moral point of view. If I could work with him again, I would love it," assures a satisfied, though sore by almost constant lumbago, Agustín Díaz Yanes, who confronted this great cinematographic and personal adventure after his two previous films, shot in shabby apartments and local bars as in Nobody Will Speak Of Us When We're Dead, or in the depths of the underground, as in No News From God.

As well as his charm and his normalcy, Mortensen has given self-designed T-shirts, maté and sweets - he got to the set every day with bags full of sweets, chewing gum and so on - to the members of the technical and artistic crew. From the active and born organizer Charlie Lázaro, assistant director, to all his great mates and actors who have accompanied him: Elena Anaya, Javier Cámara, Antonio Dechent, Nadia Santiago, Juan Echanove, Eduard Fernández, Ariadna Gil, Eduardo Noriega, Blanca Portillo, Unax Ugalde, the Italian Enrico Lo Verso, Francesc Garrido and Luis Zahera. A real treat for the brave Alatriste.

Discipline and many corrections. Those are the two keys that Charlie Lázaro, assistant director to Agustín Díaz Yanes, has used to organize thousands of extras in the large battle scenes in Alatriste. 'Each one of them has to feel important,' this professional who exudes a limitless energy assures us. He knows through experience that 'an actor who has not been nurtured can provoke a rebellion.'

In the filming in Uclés (Cuenca) of the great battle of Rocroi that closes the film (filmed with five movie cameras) the attention of the more than 500 extras was at the same time exquisite and demanding. During breaks in filming, much water was distributed amongst them, under the high temperatures that they endured wearing heavy costumes, while at the same time their makeup was being retouched with blood or dust. "Don't bend your lances," Lázaro would shout, when the soldiers had to throw themselves to the ground with their weapons/lances in their hands. Even when going to eat in the large tents prepared in the fields they went in formation. Everything has been done on a grand scale in Alatriste. "We looked more like a circus caravan as opposed to the filming of a Spanish movie." That was the feeling the producer, Antonio Cardenal had upon seeing the long line of vehicles - a total of 135, between trailers, cars and buses - needed for daily transport to particular towns and cities (eleven distributed between Andalucía, Madrid and Castilla-La Mancha) close to 260 members of Alatriste's technical team, almost 20 actors, extras and all of the equipment that goes along with this.
Top of this page
Last edited: 7 August 2005 10:18:11
© Estudios Piccaso / Origen Producciones.